At a brief but wonderful ceremony on Saturday 24th March the first Changing Places toilet facility in the district was opened in Frome town centre at the main car park toilets, with drinks and cakes in the Black Swan's Round Tower. Alison and her daughter Ettie cut the ribbon with the Mayor of Frome Shiela Gore, the leader of Mendip Harvey Siggs, Cabinet member Phil Ham, and a large crowd of campaigners, councillors and other supporters. 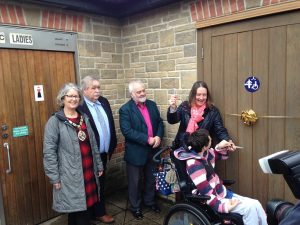 This means that people with profound and multiple disabilities who need a toilet with more space and the right equipment, including a height adjustable changing bench and a hoist, now have somewhere to go in town. They and their families can now enjoy Frome's shops, cafes, markets and other attractions. No longer does anyone have to rush home or be changed in unhygienic conditions. People just need a Radar key to use it, or can borrow one from the library (and soon also the Black Swan and Cheese & Grain).

That this facility now exists is down to the determination of Alison Douthwaite. She had been asking our councils (and those developing Frome's major facilities) for a Changing Places facility for years, to no avail (see her and Ettie's story here). In autumn 2016 Alison asked me for help to get one in town. I felt ashamed I had failed to argue strongly enough to get one into the £2m Leisure Centre renovations. I asked at Mendip, but was told by a senior councillor there was no money for these special schemes and no plans to change that. But this time I wasn't taking no for an answer. Alison and I both asked around and gathered a campaign team, including other parents and carers of people who needed the facility, district councillor Des Harris, town councillor Kate Bielby, and support from Helen Sprawson-White and Damon Hooton.

We linked up with campaigners in Glastonbury Mencap and with other senior officers at Mendip who had nearly got a Changing Places into Clarks Shopping Village in Street. We then took a motion to Mendip full council in February 2017 to argue that Mendip should facilitate Changing Places in every town throughout the district, supported by research and testimonies from parents explaining the difference it would make to their lives. With a determined group of campaigners writing into and speaking at the meeting, we won unanimous support from every councillor for a revised form of words (see here). MDC Cabinet member Phil Ham and the council's Equalities Group then adopted and progressed the issue with officer Jane Sharp's able management. Mendip agreed to host the Frome facility by converting the store room in the existing toilet block, manage the project, provided some funding for installation and all the maintenance costs, and secured some funding from a local development. Frome Town Council then provided the final £10,000 for installation, thanks largely to councillors Kate Bielby and Cath Puddick (see here), which thankfully avoided any need for charity or crowd fundraising.

So now Frome will be on the national Changing Places map and will now be an attractive accessible destination. With Mendip's backing, there will soon be Changing Places facilities in Wells Town Hall, and hopefully also in Street and Glastonbury later this year. This is a great example of cross-party cross-council collaboration, which is as it should be. Providing a facility that gives some basic dignity and makes life a little easier for people with very challenging lives is a just cause. All it took was some determination to put something right, asking the right people, and working out how (not 'if') it could be done. There has been no confrontation, no political point scoring, this is Frome after all. As Yoda said, 'Do, or do not. There is no try'. Thanks to all who helped make this happen. Frome is now a little more inclusive and accessible. There is plenty more to do, as Frome needs more Changing Places - in Victoria park, and in the Sports Centre at least, but this is a great start.

Please see here for more about how we did this, and the Changing Places website for details of these facilities. The Frome Times covered the story here, and Mendip District Council and Frome Town Council tweeted photos from the day here and here.